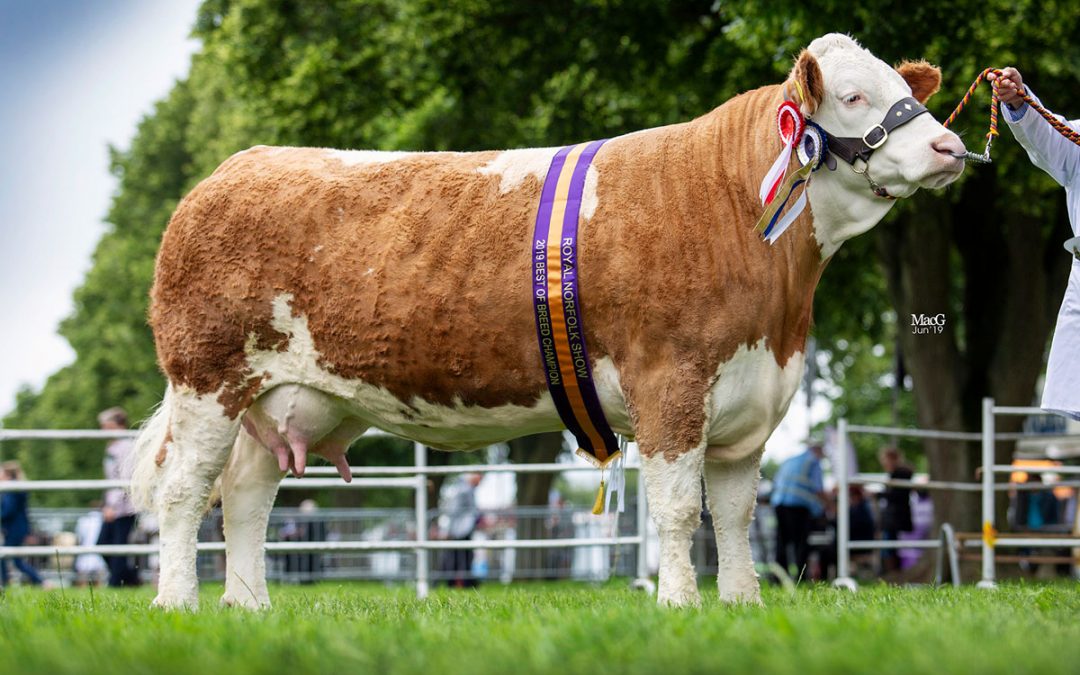 It was an honour to be asked to judge the 2019 English National Show at The Royal Norfolk Show. Thank you to the Society and Show for a very well organised day and thank you to the exhibitors for all their time and effort in turning out such a super show of Simmies.
In the Junior Heifer class Sacombe Hawaii’s Jessica caught my eye as soon as she came in. Very sweet, well fleshed and a very good mover, just my kind of heifer. This heifer went on to be Junior and Reserve Female Champion. Second place went to Heathbrow’s much younger Girlies Jewel, a very correct, well fleshed heifer for her age, third was Ashland Lucy Jezebel, another quality heifer.
The second class again had a clear winner in Heathbrow Jasmine, a powerful heifer, but still very feminine. There wasn’t a lot between second and third, Brandane Jane just having slightly more flesh than Perrywood Jasmine.
The third heifer class was easily won by Cade Irresistible, a similar style of heifer to the winner of the previous class, fleshy but still feminine. Storersmith Isla in second was a nice long heifer, just unlucky to have the Cade heifer overpower her.
Popes Princess Immie gave me another clear winner in the fourth class, a fleshy heifer who paraded very well. The next two heifers were a similar type, but Beeches Isabella had more width through the front end compared to Penton Indigo.
Two very powerful heifers led class 5. Popes Nellys Ilia taking first, being the more feminine and better balanced of the two. Heathbrow Girlies Ivy stood second. The Jukes’ Swallowhill Isabelle stood third, a lovely long female, just not carrying as much flesh as the first two.
We just had two entries in the Junior cow class, both working hard with nice calves at foot. Theberton Honey was the deeper bodied of the two with a bit more shoulder than her herd mate Hollie.
The Intermediate cow class was led by Kennox Divas Gena, being the widest and biggest of the three. Sway Gorgeous Girl stood second, another big cow, but just not having the width through the front end of the first cow. Fircovert Glamour Bluebell came in third, just missing the scale of the other two.
In the Senior cow class, I found my Champion. I immediately fell for Sacombe Dandelion Oma when she floated into the ring saying, “Look at me!”. She wasn’t the biggest cow in the class, but to me she was everything a Simmie cow should be. Very feminine, well balanced, good length and width, especially through the backend, good locomotion, loads of milk, and a super young bull calf at foot. Second place went to Theberton Emma 2nd, another well balanced, breedy cow.
The first class of males was won by Sacombe Joker, maybe a bit raw on the day, but the most correct and well put together young bull in the class. Second was the heavier, but less balanced Popes Jethro, and third went to the nice shaped Scotland Hill Jackaroo.
The second bull class found me my Junior Male Champion in Scotland Hill Juggernaut, a growthy, well fleshed young bull. Second and third were two similar bulls, Storersmith Jumanji and Penton Jolly, unfortunately Jolly was lame, so took third.
My Male and Reserve Overall Champion came from the next class, again a clear winner, Heathbrow Important towered above the other two entries in the class. His length, cleanness and power are what we have been looking for in a stockbull, and I’m pleased to say that he has since come home to Blackford. Second place went to the bouncy, but well-made Fircovert Isaac with Shannock Ice-T being third.
The four senior bulls were split into two types, my preference was for the smoother fleshed more traditional Drumsleed Explosion in first and Sway Hector in second.
I was very proud to see the Simmental team of five going on to win the prestigious Heygates Interbreed Team of Five competition, and Heathbrow Important taking the Male and then Supreme Interbreed Champion later in the show.
Thank you again to everyone involved for their hospitality and hard work at the show. 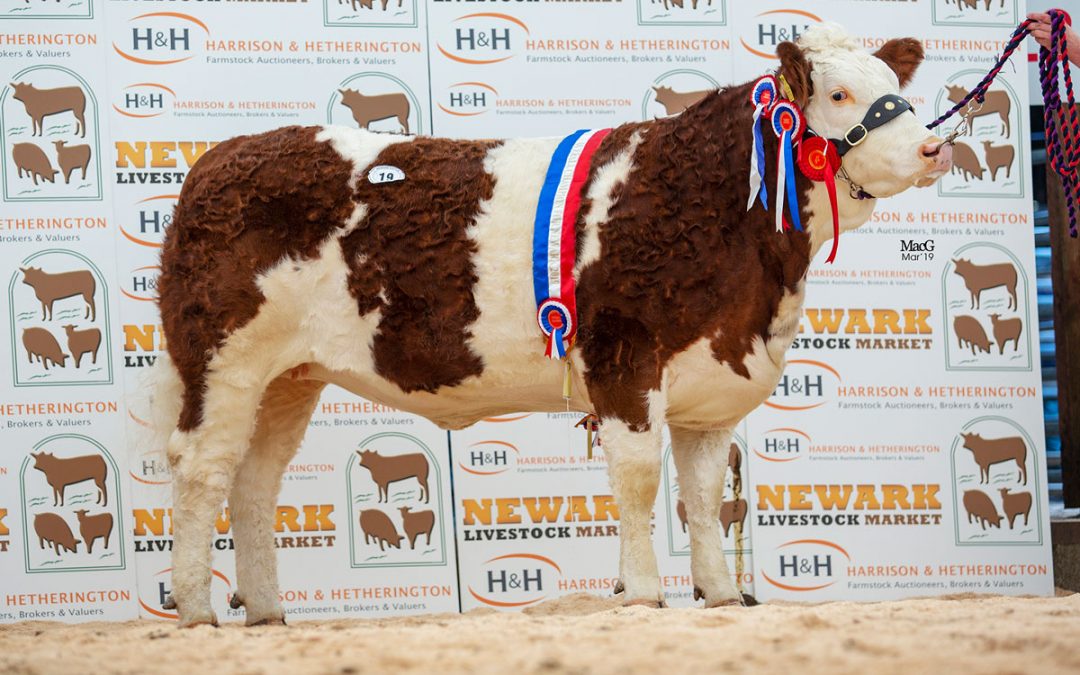