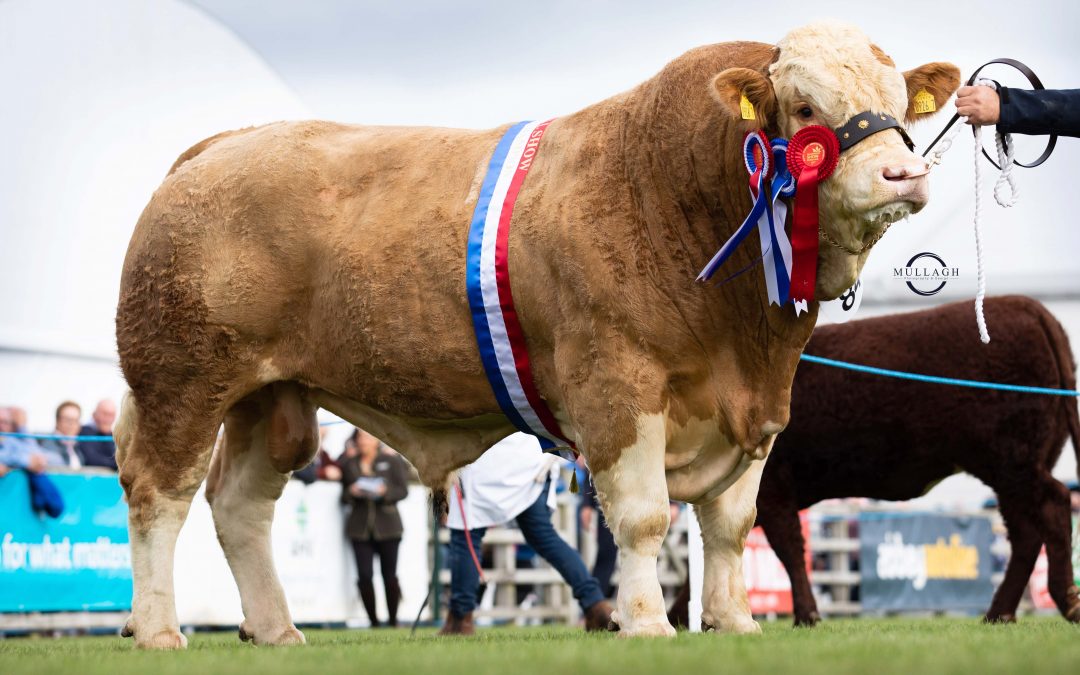 Born in January 2017, Hiltonstown Indiana was bred by Richard and Rhys Rodgers, Portglenone, and is stock bull in the McKane family’s 50-cow commercial herd, which is run alongside six pedigree cows registered under the Springfarm prefix. He is sired by the 2014 and 2015 Balmoral supremo Dermotstown Delboy, and is out of the Auroch Amos daughter Hiltonstown Erica VG88.

Balmoral Show was Indiana’s second outing, with him having previously won the Male Championship at Ballymena Show in 2019.

Claiming the day’s Female and Reserve Championship honours was the January 2020 born maiden heifer Drumsamney Lady Jane, brought out by Jonathan Henderson, and father Roger, from Desertmartin. Sired by Kilbride Farm Glenhead, she is the second calf bred from the Omorga Murray daughter Ranfurly Lady Diana 29th ET, purchased for 3,900gns at the Ranfurly Herd’s production sale at Dungannon in September 2016.

Former British Simmental Breed Society President Robin Boyd, who owns the Slievenagh Herd based at Portglenone, is a highly respected judge who has officiated at major shows throughout the UK and Ireland, and twice at the Danish National Show.

“It has been an honour to add Balmoral Show to my list of ‘royal show’ judging appointments,” said Mr Boyd, who over the years has judged at Stoneleigh, the Highland, Welsh, Norfolk, Bath and West, and the famous Perth Bull Sales.

“Agricultural shows, like many other events, have been hit hard by the pandemic. This year’s Balmoral has attracted a small entry of Simmentals, but I’d like to congratulate the Royal Ulster Agricultural Society on organising a successful show under difficult circumstances. I’d also like to thank the exhibitors for supporting this year’s show.”

Bull, born on or before 31/12/19- 1, James Kane, Hiltonstown Indiana by Dermotstown Delboy.