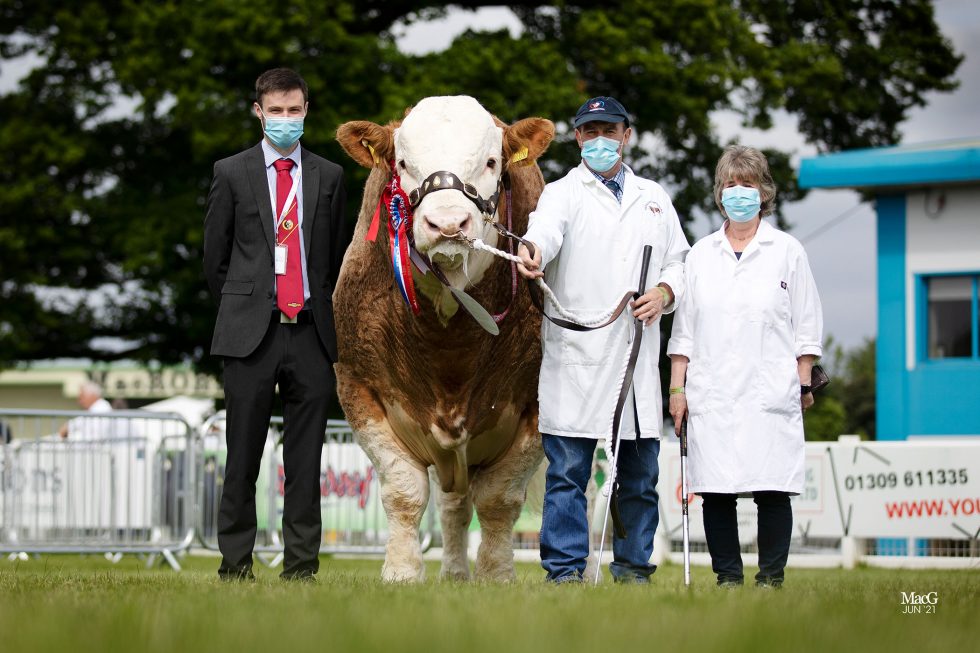 Uniquely held without a live audience in attendance, due to the ongoing corona virus situation, the Royal Highland Showcase features seven days of events and judging being streamed on dedicated live channels to a worldwide audience.

Very much in keeping with the emphasis on youth across the cattle judges, the small Simmental section was judged by Tom Bruce of the Tillyeve Simmental herd, Udny, Ellon, Aberdeenshire.

No stranger to the showring, Drumsleed Hivy 16 from the Smiths has been successful previously at the Royal Highland Show, taking Male Champion when the Show was last held back in 2019. In the same year, Drumsleed Hivy also took Male and Overall Champion at the Scottish National Show in Kelso. The June 2016 born Drumsleed Hivy is sired by Haystar Cracker 11, who was purchased by Drumsleed at Stirling in May 2013, where he was also Male Champion, and is out of Drumsleed Valonia.

Commenting, Morag Smith described Hivy as having “a great temperament and a pleasure to show”. Drumsleed Hivy’s first son, Drumsleed Kingsman, recently sold for 11,000gns at Stirling back in February this year. Taking second place in the senior bull class was the November 2018 born Islavale Jabba from Gavin Brown, Springfield Farm, Penicuik, whilst the junior bull class was won by the September 2020 born Manor Park Lionheart from DC Houldey, Waterbeck, Lockerbie.

The October 2019 born Annick Fresia’s Kiki from Lachlan Quarm lifted the Overall Reserve Championship in what was her first outing in the show ring. This maiden homebred heifer, is sired by Wolfstar Gold Digger and is out of Annick Whitney’s Fresia. She is also half-sister to the Senior 2019 Stars of the Future Champion, Annick Trixie Belle 24th. Annick Fresia’s Kiki is one of a number of heifers being retained in the herd to increase female numbers, along with another Wolfstar Gold Digger daughter, Annick Ginger’s Lucia who also placed second in the Junior Female Class. Mr Quarm sees a good future with both Annick Fresia’s Kiki and Ginger’s Lucia, especially given their presence at a young age. In the senior female class, Coltfield Katie from J C MacIver took the top spot, with Islavale Kenya from C Jackson taking second place.

Representing the Simmental breed in the pairs competition was Islavale Jabba along with Annick Fresia’s Kiki.