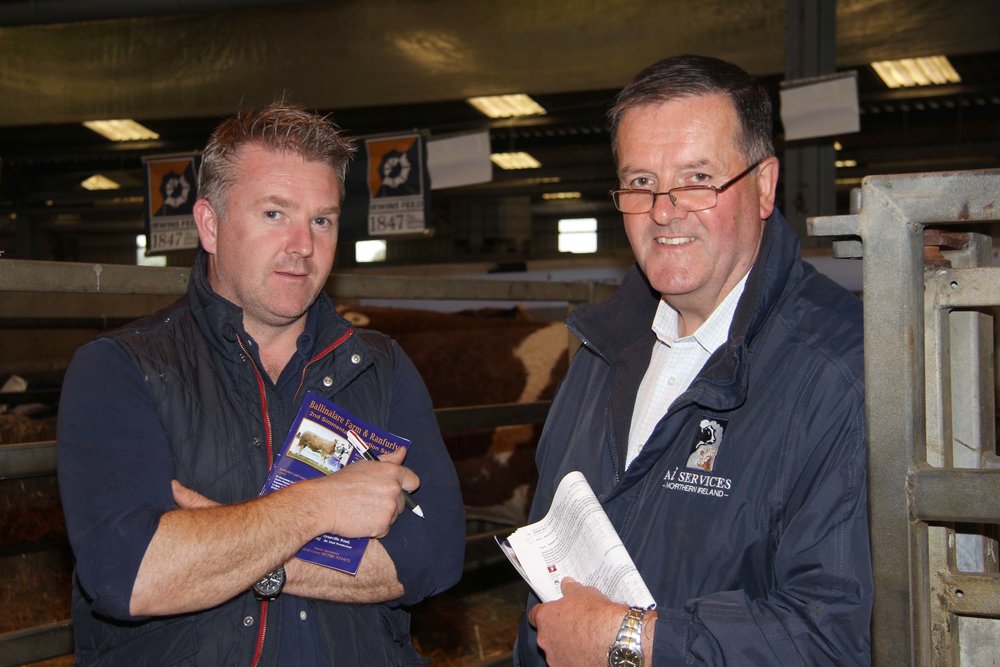 Prices reached a ceiling of 8,800gns at the 2nd production sale from the noted Ballinalare Farm and Ranfurly Simmental herds, conducted by Taaffe Auctions at Dungannon.

Leading the entry from David Hazelton’s Ranfurly Herd was the much-admired Ranfurly Lady Diana 24th, winner of numerous accolades throughout the show season, and recipient of the Danske Bank Female of the Year Award.

Born in April 2014 she is by Raceview King, and out of the Dovefields Gallant daughter Ranfurly Lady Diana 10th. Scanned in-calf to Omorga Murray she attracted an opening bid of 5,000gns from the packed ringside audience, and after a bidding frenzy guest auctioneer David Lowry brought his gavel down at 8,800gns, selling to telephone bidders Fovargue Bros for their Edroda Herd based at Coleorton, Coalville in Leicester.

Following close behind at 4,250gns was the July 2014 born Ranfurly Weikel 14th. Also by Raceview King, she is bred from the Balist daughter Ranfurly Weikel 2nd. This one joins Seamus O’Kane’s Dressogue Herd at Omagh, and is in-calf to the Cleenagh Fasher son Ranfurly Confederate – purchased by the Islavale Herd at the Dirnanean dispersal sale.

Jonny Hazelton’s offering peaked at 4,500gns, realised by the 2016 Balmoral reserve junior champion Ranfurly Weikel 16th. This January 2015 Cleenagh Flasher daughter is bred from a dam by Hillcrest Champion. She sold to an undisclosed pedigree breeder in England.

The 12,000gns Dovefields Gallant was the behind the breeding of Ranfurly Lady Diana 25th. Bred from the Cleenagh Flasher daughter Ranfurly Lady Diana 14th, she sold for 4,200gns and is in-calf to Raceview King. This one joins Nigel Glasgow’s Bridgewater Farm Herd at Cookstown, County Tyrone. 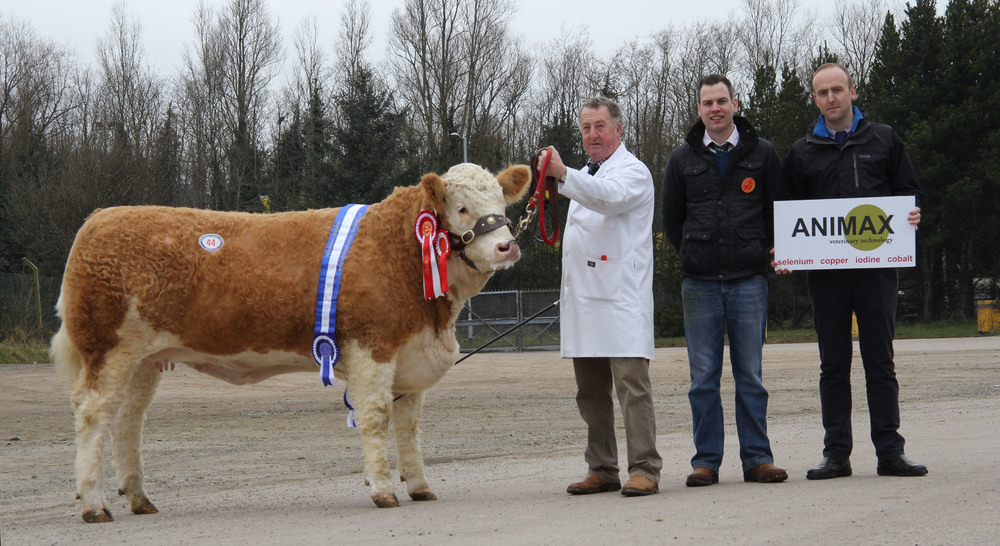 Simmental heifers to 5,400gns and

bulls to 4,600gns at Dungannon

After spirited bidding she came under the hammer of auctioneer Trevor Wylie at 5,400gns, selling to Oliver McGuinness from Eglinton, County Londonderry.

Topping bull trade at 4,600gns was the unshown Lakeside Fred TSI+73 SRI+85 consigned by Cecil Chartres and David Farrell, Lisbellaw. Born in June 2014, he was sired by the 10,000gns Perth champion Drumlone Anchor, and is out of a home-bred dam by Kilbride Farm Newry – one of six pedigree cows in the herd. In the breed’s top 5% for daughter calving ease +5.3, and top 25% for eye muscle area, he sold to Raymond Pedlow who runs an engineering business and a herd of 180 suckler cows at Lurgan, County Armagh.

Next best at 3,400gns was the reserve male champion Lisglass Fortress TSI+78 SRI+83 bred by the father and son team of Leslie and Christopher Weatherup, Ballyclare. This sixteen-month-old entry was sired by stock bull Dermotstown Delboy – Balmoral champion in 2014 and 2015; and is bred from Fole Vivian 59th – one of 35 cows in the herd.  Buyer was Nigel Kee from Douglas Bridge, Strabane.

The Weatherup duo also realised 2,500gns for the second placed maiden heifer Liglass Foxy. Born in August 2014, she is by Dermotstown Delboy, and is out of the Kilbride Farm Porter daughter Lisglass Danielle 3rd. This was the first Dermotstown Delboy to be offered for sale. She joined Chris Traynor’s Kilmore Herd based at Armagh.

Duncan McDowell, Newtownards, realised 2,350gns for the April 2013 born Castlemount Ruby ET. She was sired by Curaheen Vio, and is out of the Cleenagh Flasher daughter Slievenagh Ruby. Included in the price was her three-month-old Hockenhull Alibaba heifer calf. Buyer was Robert Duncan from Magherafelt.

Also selling at 2,300gns was the August 2014 born Bridgewater Farm Fernando TSI+66 SRI+59 bred by Nigel Glasgow from Cookstown. Sired by the Omorga Volvo son Lisglass Colombus, he is out of a home-bred dam by Hockenhull Maverick. Buyer was W Black from Pomeroy.

Claiming the day’s reserve female championship was the two-year-old in-calf heifer Kilbride Farm Eunice 174F bred by the Robson family from Doagh. Sired by was sired by the 15,000gns Cairnview Snazzy, and is out of a home-bred dam by Kilbride Farm Warren. This one failed to meet her reserve and returned home unsold.

Commercial females attracted a ready market, with in-calf heifers selling to a top of £1,320, paid to Eamon McCloskey, Kilrea. Maiden heifers peaked at £1,350 and £1,250, realised by Tom Bogue from Brookeborough.

The NI Simmental Cattle Breeders’ Club is indebted to its sponsors, Animax and Millburn Concrete.