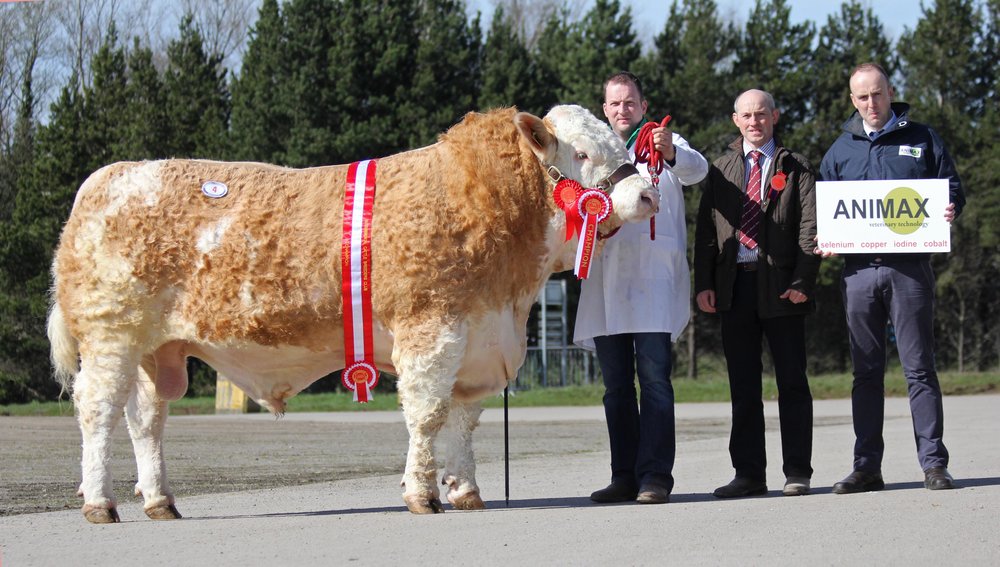 Simmental bulls to a top of 3,400gns at Dungannon

Quality bulls with good conformation and above average Breedplan figures attracted a ready market from the packed ringside audience. Auctioneer Stephen Redmond confirmed that 15 bulls sold to level at £2,604 per head – a marginal increase of £14 on last year’s average, but with a significant rise in the number of bulls finding new homes.

Securing the day’s top bid of 3,400gns was the January 2016 born Bridgewater Farm Hector TSI+67 SRI+79. Sired by the 2014 and 2015 Balmoral breed champion Dermotstown Delboy, this second prize winner is out of the home-bred Anatrim Bodybuilder daughter Bridgewater Farm Phyliss.

Following close behind at 3,300gns was herd mate Bridgewater Farm Gazza TSI+63 SRI+76. This first prize winner was born in November 2015 and is also by Dermotstown Delboy. His dam is the Samark Superman daughter Bridgewater Farm Simone. Boasting a calving ease score of +8.4 in the breed’s top 1%, and a milk figure of +8 in the top 20%, he was snapped up by Peter Morris from Newtownstewart.

The first prize winning Drumlone Hotrod TSI+64 SRI+89 sold at 2,900gns for Kenneth Veitch, Lisbellaw. Born in January 2016, and sired by the outcross sire Curaheen Apostle, he is bred from a Raceview King daughter carrying the Corbally prefix. With a calving ease score of +5.3 in the top 5%, he caught the eye of Ian Brown from Macken, Enniskillen.

Two lots came under the hammer at 2,800gns each.

First to sell was the October 2015 born Kilbride Farm Gary TSI+44 SRI+58 from the Robson family at Doagh. This second prize winner was sired by Curaheen Dickens, and is bred from the Crugmelyn Brenin daughter Kilbride Farm Jolly 13E. Buyer was G McAteer from Newry.

The reserve male and reserve supreme champion Hiltonstown Giles TSI+66 SRI+76 sold at 2,400gns for Richard Rodgers, Portglenone. Born in September 2015, and sired by Mohona Dandy, he is out of a home-bred Auroch Amos daughter. Buyer was Joe Hughes from Dungannon.

The same price was paid to club vice-chairman Conrad Fegan, and father Val, from Rostrevor, for the third placed Knockreagh Gail. This June 2015 born heifer is a daughter of Popes Barclay. Scanned in-calf to Kilbride Farm Comber, she sold to Thomas Stewart from Garvagh.

Duncan McDowell, Newtownards, realised 2,300gns for the reserve female champion Castlemount Cute. Born in January 2016, she is by Longhbeach Darius, and out of Drumagarner Cute. Buyer was David Carson from Garrison, County Fermanagh.