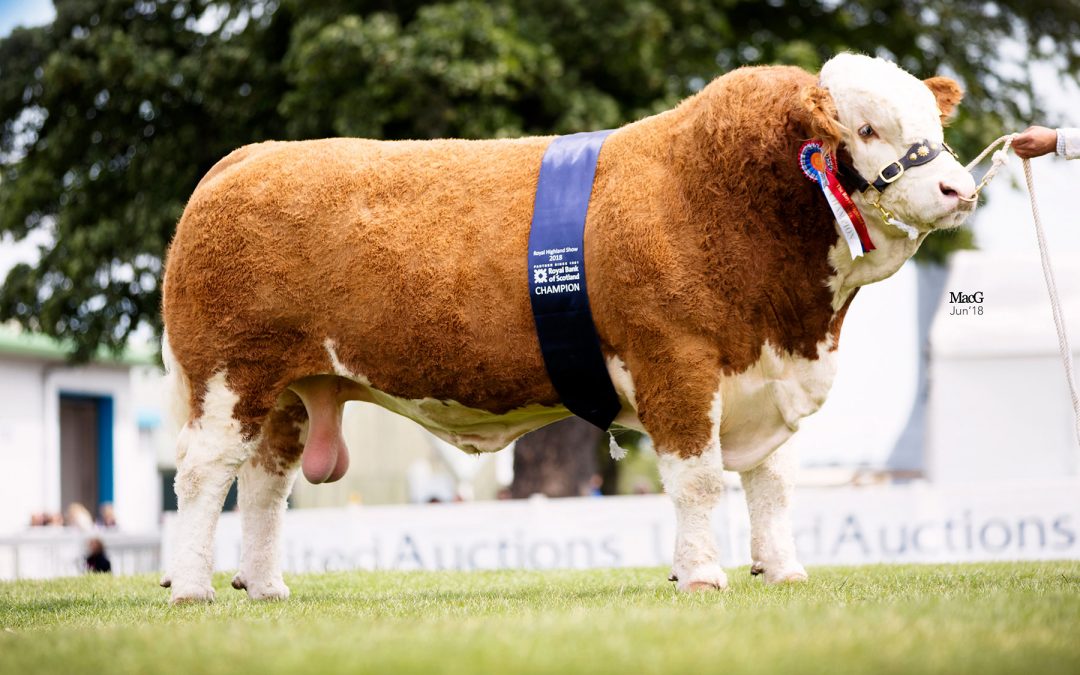 At the time of writing this report, our herd is in the process of being prepared for dispersal, but this in no way reduces my enthusiasm for the breed or confidence in a very exciting and progressive future for Simmentals and their breeders. After thirty-one years of involvement with this breed at all levels, placing the cattle at the Highland Show is indeed the icing on the cake.

As a breeder of commercial cattle for over fifty years, I have always been very conscious of the qualities that lead to ease of management and profitability. I hope that my placings of the many quality cattle paraded before me went some way to bear this out.

As always at the ‘Highland’, the eleven classes led off with the youngest female class, yearling heifers. There were nine heifers forward with the eventual first place going to Frank Gwynne’s Chestermann Empire Stella. A very stylish young heifer who moved really well and has the potential to grow into a very impressive cow. Second was the Green’s Corskie Inita and third was Richard McCulloch’s Overhill House India.

The next age class was well supported with thirteen of the sixteen entries forward. The winner of this class was Jimmy McMillan’s Sterling FCUK Impuls – a very long, clean, whole coloured heifer with lots of style and beautifully shown. Perhaps not quite perfect behind but nevertheless a worthy winner. Second was Heather Duff’s Pitmudie Florin 2nd and third was Jim & Patricia Goldie’s Newbiemains Impressive.

The July to December 2016 class was again well supported with twelve entries forward. The Green’s Corskie Herlande came out top in this strong class, A very sound, good moving heifer who went on to be Best Junior Female and eventually Best Junior Animal of the breed. Second and Reserve Junior Female was Gerald Smith’s Drumsleed Hilight. She also followed the first prize winner through to become Reserve Overall Junior Champion. Third in the class was Michael Durno’s Auchorachan Letta H1.

The class for heifers born between 1st January and end of June 2016 was slightly smaller but of a very high standard. The eventual winner of a very close-run decision was Heather Duff’s Pitmudie Havana, beating Jimmy & Vikki Wood’s Popes Rhona. Havana showed more breed character through her head and front end and went on to be Female Champion and Reserve Overall in a very strong female section. Third in this class to these two impressive animals was Corskie Harp from the Greens.

Heifers born in 2015 was a strong class with the older animals nursing calves. The winner was Gerald Smith’s Drumsleed Gretel. A well grown heifer with a tidy udder, making a good job of rearing her calf. Second was Andy Wilson’s Cairnview Tilly 4th. Not quite as strong as the first prize winner but correct in every way and rearing a classy calf very well. This combination went on to win the prize for the Best Cow & Calf, judged as a pair. Third in the class was a younger heifer from Richard McCulloch, Overhill House Giggle.

The junior cow class had only three forward with Woodhall Erica in first place. A well grown dark coloured young cow from Richard McCulloch, nursing a good calf. A cow who will have a great future when she matures. Second was Gerald Smith’s Drumsleed Farina and third was Tom Henderson’s Annick Trixibelle 15th.

The senior cow class was the smallest in the female section with only two forward but was won by the very impressive Sterling Petra’s Cairo. This seven-year old cow was nursing a well reared calf but is starting to show signs of age in her locomotion. She went on to be Reserve Female Champion. Second was Dargill Cassie, also seven years old and in her working clothes, nursing a bull calf very well.

The bull classes were not quite so well supported as the females. The junior class of bulls had seven forward out of thirteen entries and was won by Corskie Infinity, a yearling bull from the Greens. A very free moving and growthy bull with all the right attributes to be a good herd sire. Second was Frank Gwynne’s Chestermann Imran and third was Skerrington Iceman from the Goldies.

Intermediate bulls was a little better filled class with twelve forward, to be led by Blackford Iolair. A red and white bull with exceptionally good fleshing and thickness throughout who went on to win the Interbreed Beefbreeder/Breedplan championship the following day. Second was Heather Duff’s Pitmudie Inverurie and third was Gerald Smith’s Drumsleed Iceman.

The first senior bull class had only two entries forward and was won by Camus Harold, a two-year old bull from the Woods. Very well fleshed, plenty of width and a great mover. Second was Overhill House Hercules from Richard McCulloch.

The last class of aged bulls only had two, but they were very impressive. Winner of the class was Blackford Galaxy from Michael Barlow. On his second visit to Ingliston under new ownership, he surpassed last year’s successes and went on to win the Male Championship and the Overall Breed Champion. He is a big bull carrying a lot of condition but still moved actively and freely. The second bull was Richard McCulloch’s Curaheen Drifter, an extremely thick, well fleshed bull also but did not move so freely as the first.

After placing all the seventy-two animals in the classes it was very satisfying to have all the first prize winners line up in a very pleasing show of top-class cattle. Blackford Galaxy making an outstanding Overall Champion with Pitmudie Havana a very worth Reserve.

I would just like to conclude by thanking and congratulating all the exhibitors for presenting such a fine show of cattle on a day when the weather was perfect for the event. Also, a big thank you to the directors, stewards and Scottish Simmental Club who, as always, excelled in their organisation of the judging, the welcome and the hospitality extended to Kate and myself on what will always be a memorable day.