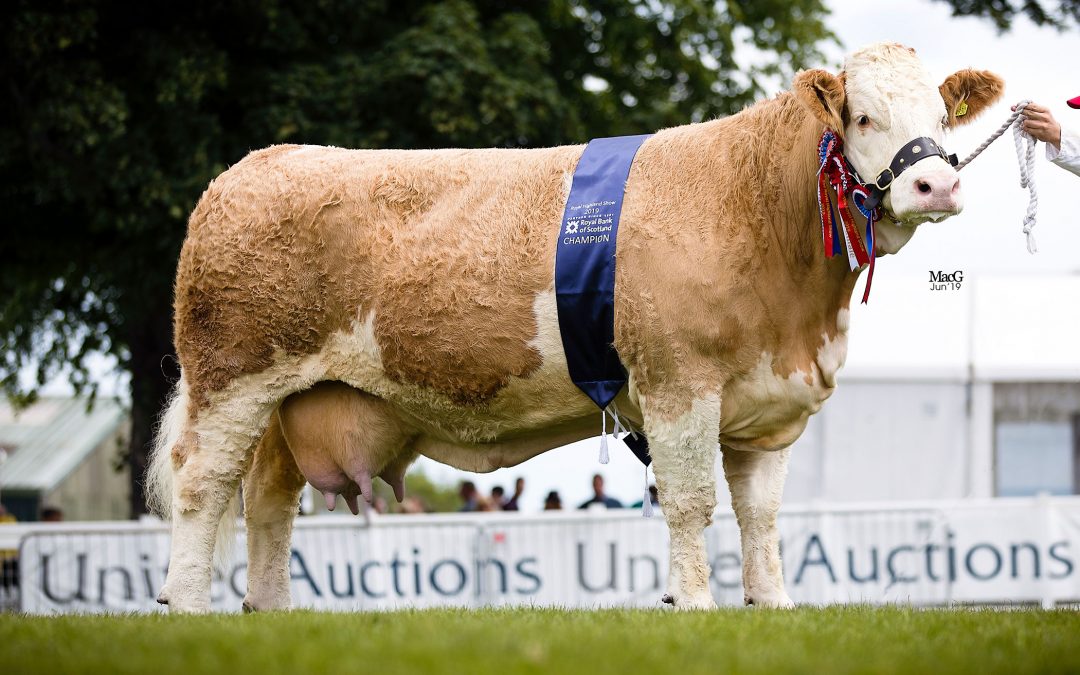 Firstly I would like to thank RHASS for their kind invitation to judge the 2019 Simmental classes at the Royal Highland Show. It was a great honour and privilege and definitely one off the bucket list. It was a cool, dry and blustery day, so good conditions for showing cattle. As I waited in the ring for the first class I can honestly say I had butterflies in my stomach, excited with anticipation for what the morning ahead had in store for me!

There were 12 heifers in the first class which all looked stunning entering the ring. I placed the youngest heifer 1st from Michael Barlow, Ashland Lucy Jezebel, a long heifer with great style. 2nd was Pitmudie Jamaica who was of a similar type to the 1st place heifer. 3rd went to Sacombe Hawaii Jessica, a different style of heifer carrying more flesh. Cairnveiw Rea took 4th, another good heifer with a great top.

The second class kept up the standard and my first pick was Frank Gwynne’s Brandane J-Lo, a very correct heifer with length, power and great locomotion. Standing next to her in 2nd was Corskie Joanna, another good female however was carrying more condition and not the same power as my 1st place. 3rd was Garmouth Glory’s Jessica from Laura Beattie, 4th came from Richard McCulloch with Overhill House Joon and Perrywood Jasmine was 5th.

The next class of females, born between July and the end of December 2017 presented me with an easy first, Corskie Illusion, who I thought at this stage would probably go further on the day. In 2nd was a really fleshy heifer from Heather Duff, Pitmudie Irish Mist, followed closely in 3rd place by Overhill House Ice Maiden. 4th went to a very well presented Newbiemains Isla.

The fourth class of heifers was very well supported with 9 animals forward. There was an obvious first in this class, Sterling’s FUCK Implus, from Reece and Andrew Simmers. A very eye catching animal, with an abundance of breed character, very fleshy but moving well round the ring. 2nd was Garmouth Dumandy Isabella, 3rd Pitmudie Florin 2nd, 4th Corskie Inita and Jim and Patricia Goldie collected the 5th and 6th rosettes.

I found the next class extremely hard to judge, comparing  in calf heifers and heifers with a calf at foot is always a difficult task I find. After some serious deliberation I placed 1st a very sweet and milky heifer from Michael Durno in the form of Auchorachan Letta H1 . She was working very hard and making a grand job of her little heifer calf. 2nd and 3rd went to the Green family from Corskie with Corskie Herb and Corskie Harp . Harry Houldey took 4th with Clonagh Honey Cream.

There was only one entry in the next class, Cairnview Tilly 4th, she walked round the ring, moving very well and with a great calf at foot.

The oldest cow class, born before 2013 only had one animal forward also, Corskie Disco. She immediately owned the ring with her twin calves. At 7 years old her locomotion was excellent moving gracefully with impressive style and breed character. I was looking forward to how she would stand up later in the day and thinking she was going to be hard to beat.

The junior female championship was next on the list to judge and I was very pleased with my 1st prize junior heifers as the returned to the ring. The Junior Female Championship went to Corskie Illusion, she had tremendous length, width and locomotion, a great cow in the making. Reserve went to Newbiemains I’m a Gem.

The Overall Female Championship was next and the powerful, elegant Corskie Disco was an easy winner with Sterling’s FUCK Implus from the Simmers boys an obvious reserve.

Moving onto the first of the male classes, where I feel more at home judging, there were 7 bulls forward. The red ticket in this class went to Lynfield Joseph, a long well grown bull who moved well. 2nd went to the Smith family from Drumsleed in the form of Drumsleed Jura and 3rd to Nick and Nadia Gwynne with Chestermann Jimmy.

The bull class aged between January and March 2018 had a large entry on 9. Greencap Jaeger was my pick, a long dark red bull showing great style and potential. 2nd went to a real muscle machine, Cargill JJ from D C  McLaren & Partners followed by Chestermann Jupiter in 3rd and a close 4th for Drumsleed Jaeger.

The senior bull class had two entries,  both Denizes Hamish and Drumsleed Hivy showed great breed character however it was Hivy that took the red rosette on the day as he carried himself well, moved effortlessly around the ring with an outstanding presence.

My Junior Male Champion went to Greencap Jaeger from Colin Inglis. A very eye catching bull in the ring and I remember thinking he should go on to become a future pedigree stock bull. Jaeger also went onto become the Overall Junior Champion, with the reserve going to Corskie Illusion. Both great examples of the Simmental breed, Illusion a modern and well-rounded heifer however Jaeger just had more style and show character on the day.

Drumsleed Hivy returned to the ring to compete against Greencap jaeger for the Overall Male Championship. I really liked Colin’s young bull but the sheer power of Hivy made him my worthy Champion.

I was very happy as my male and female champions entered the ring for the final time. Two tremendous animals which had left me with a very hard decision to make. But the gracefulness of Corskie Disco had won me over, she was a stunning cow and a true matriarch of the breed and I was delighted to award her and the Green family the RHS 2019 Championship. Sterling’s FCUK Impuls took the reserve Champion, a heifer who I’m sure will have plenty of success at shows in the future!

As I reflect on my judging, I’d like to take the opportunity to say how very proud I am to be part of the Simmental breed. I was very impressed by the presentation and quality of the animals paraded in front of me and I would like to congratulate every exhibitor for taking part and showcasing the breed for all to see.