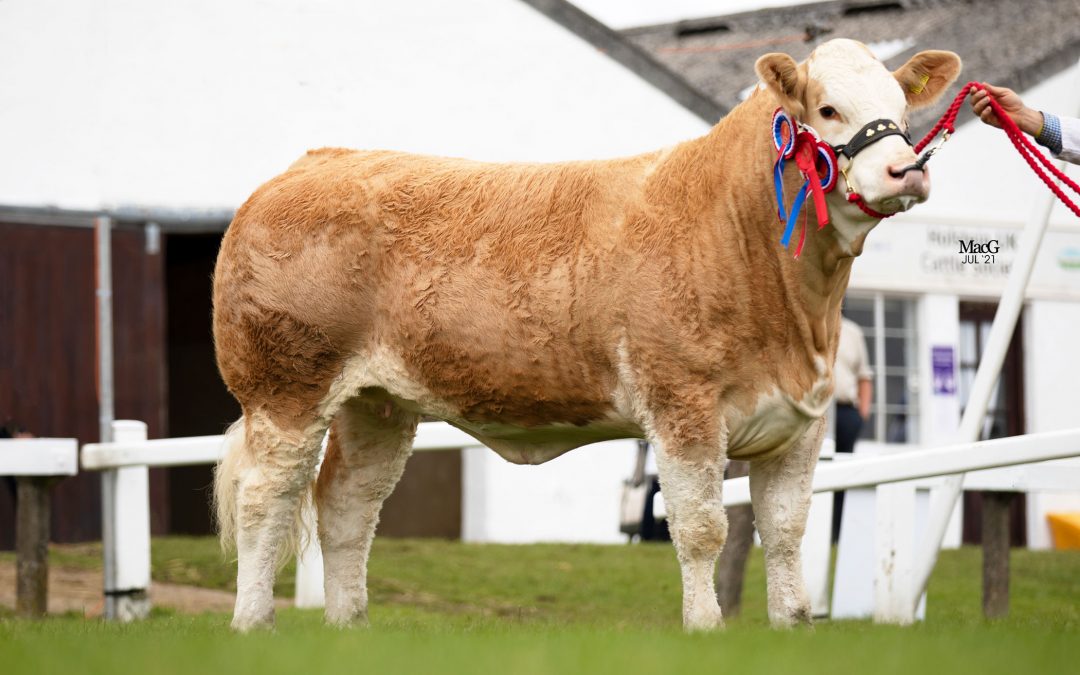 The April 2019 born heifer Heathbrow Koko Star (P) capped a memorable day for David & Lesley Sapsed, High Heath Farm, Codicote, Hitchin, Herts when she was crowned the Overall Supreme Simmental Champion at the 2021 Great Yorkshire Show at Harrogate. Following her through to take the Overall Reserve was the Junior Champion Heathbrow Lavender also from the Sapseds.

It was a welcome return to the summer showring for the pedigree livestock sector, with the small but quality Simmental entry presented to the judge Jim Cowan, the herd manager at the long established and well known Kersknowe herd at Kelso, Roxburghshire. Having initially won the class for heifers born in 2019, Heathbrow Koko Star (P) moved on to win the Female Championship before being awarded the day’s blue riband Simmental Overall Supreme Champion award. Heathbrow Koko Star is by Scotland Hill Cairo 11 EX 91 and is out of Heathbrow Emerald Star (P) EX 90, a Dirnanean Welcome 1 (P) daughter. Commenting on his choice of Champion, Jim Cowan said: “This is just a really sweet, well fleshed heifer, up to size, with good legs and great locomotion. She has all the attributes to be a great breeding female and was a worthy winner on the day.” For Jim who has managed the Kersknowe herd for some 24 years and has bred Simmental bulls to sell at 16,000gns from what is now a 50-cow strong herd, the Great Yorkshire Show was a first summer ‘major’ that he has judged Simmentals at and he thanked both the Great Yorkshire Show and the Simmental Society for the opportunity.

Heathbrow Koko Star’s dam line features AWL Starlet 8E, the herd’s original imported Simmental heifer of some 25 years ago. Imported from top Canadian breeder A W Londry, Starlet ‘was an outstanding cow who won four interbreeds and eight breed championships’. She lived until two weeks prior to her 21st birthday and has been a consistently strong breeding female in the herd.
For the Sapseds winning the Overall Supreme amounted to a defence of the same title they won in 2019, the last time the show was held, when the bull Heathbrow Important also lifted the Individual Interbreed award. A tremendous haul of wins at the 2021 show saw the Heathbrow herd take the Overall Supreme; Reserve Overall; Female Champion; Reserve Female Champion; and Junior Champion. For good measure the herd also won the Best Pair title. Following the judging a clearly delighted David Sapsed said: “We are delighted to win such a prestigious show for the second time. More than that we are just thrilled to be in the show ring and it’s so good to be back. Cattle is the biggest social club in the world, and it’s great to see and be amongst Simmental friends again.”

Taking the Reserve Male Championship, from the same team, was Denizes Lorenzo. Thicker in type this young bull is 3rd January 2020 born. Speaking after the judging, John Barlow commented: “Following the difficult Covid situation for everyone, we were delighted to be able to enter and support the Great Yorkshire Show this year. The summer shows offer a great opportunity to showcase youngstock. We’re delighted to have had a successful show and both of these young bulls will be aimed at the Society’s sales in the autumn.”

In the Group of Three, the red rosette went to Mr Paul Gunther who had made the journey from Fir Covert Farm, Fir Covert Road, Felthorpe, Norwich. His winning three heifers comprised of Fircovert Kitty (by Fircovert Gladiator 15); and embyo calves Fircovert Lizbet and Fircovert Ladybird (both by Denizes Hamish 16).