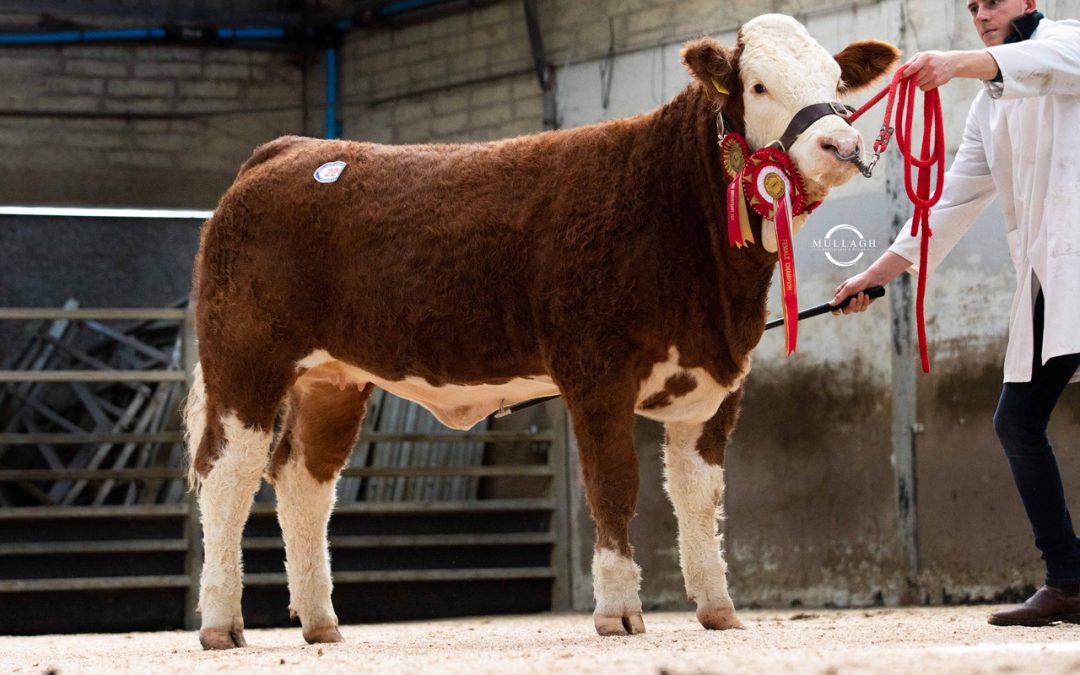 There was standing room only at Dungannon Farmers’ Mart for the 50th Anniversary Simmental Spectacular Sale held on Friday 22nd October.

Celebrating 50 years of the NI Simmental Cattle Breeders’ Club, the event attracted strong interest from pedigree and commercial buyers from throughout the Province and further afield.

The pre-sale show was judged by British Simmental Cattle Society President Stewart Stronach from the noted Islavale Herd based at Maisley, Keith, Banffshire. “It was a strong show, and the standard of cattle was high in all classes.”

Hitting the headlines in both the show and sale rings was the Female Champion Ranfurly Weikel 40th L10 from David and Jonny Hazelton’s herd at Dungannon. Born in April 2020, she was sired by the Cleenagh Flasher son Samark Superman, and is bred from the Raceview King daughter Ranfurly Weikel 23rd VG86. This one topped the sale, coming under the hammer of auctioneer Trevor Wylie at 5,400gns, and selling to new breeder Patrick Fitzsimmons from Strangford, County Down.

“The female champion is a very sweet heifer. Full of breed character, and will be a great asset to anyone’s herd,” said Stewart Stronach.

Five heifers from the Ranfurly prefix sold to average £3,717 per head.

The third placed Cladymore Lovely ET sold at 4,600gns for the Reaney family from Mowhan, County Armagh. Sired by the 2014 and 2015 Balmoral Show champion Dermotstown Delboy, this April 2020 heifer was bred from the Borness Troy daughter Cladymore Annabell. She joins the Drumsamney Herd owned by Roger and Jonathan Henderson, Desertmartin, County Londonderry.

A cow and calf consigned by Gareth Wilson, Enniskillen, sold for 3,900gns. The January 2013 Ashland Ella Beauty EX90 was sired by Kilbride Farm Ahoghill, and bred from the Raceview Nigel daughter Ashland Beauty 2nd. She was accompanied by her sixth calf, the seven-month-old Curaheen Gunshot daughter, Hillhead Farm Miss Beauty P. P’d in-calf and due February 2022 to Curaheen Gunshot, this outfit was snapped up by Dermot Ronney from Newry, County Down.

A draft entry of heifers from Harry and John Moore’s Omorga prefix topped at 4,700gns, and saw six heifers change hands to average £3,517 each.

A draft entry of heifers from Noel and Mae Kilpatrick’s Ballymoney Herd, Banbridge, topped at 2,700gns, with five selling to average £2,289 each.

The March 2019 Ballymoney Kirstie sold for 2,700gns to Ian Magill from Millisle, County Down. Sired by Curaheen Earp, she was bred from the Celtic Rock daughter Ballylane Heather ET.

The male champion Breaghey Lord Enniskillen sold at 2,600gns for Andrew Clarke. Born in June 2020, he was sired by the home-bred Breaghey Jeronimo, and is out of the Dermotstown Delboy daughter Breaghey Vida 1. He sold to Samuel Barbour from Annalong, County Down.

A strong trade in the commercial section of the sale was topped at £2,750 by a ten-month-old heifer. 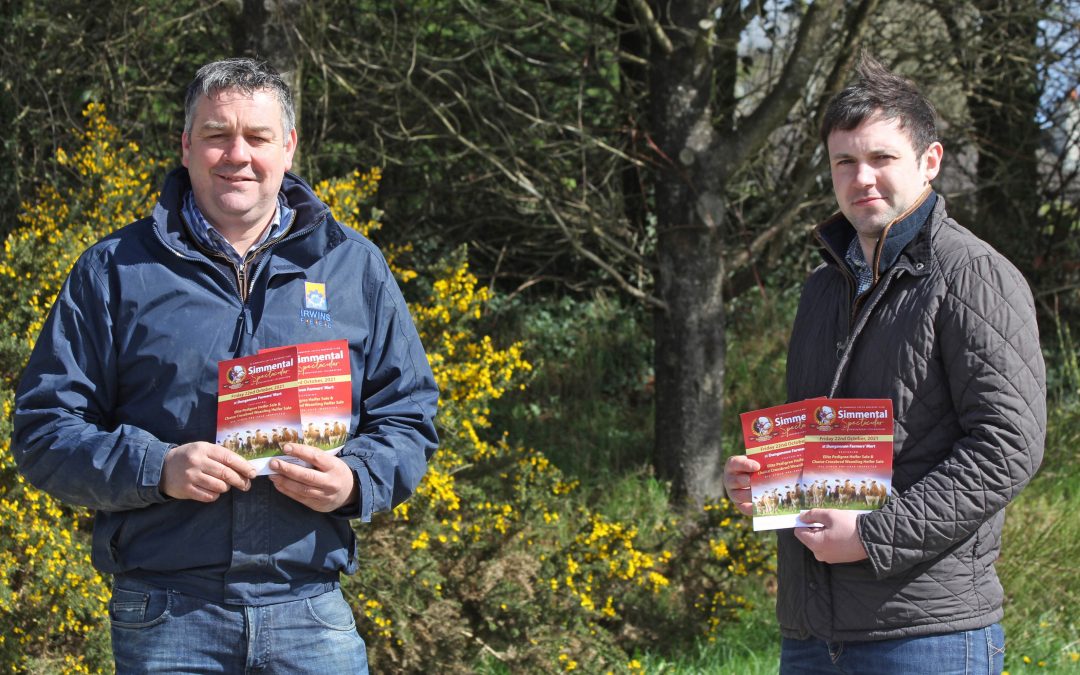 The Northern Ireland Simmental Cattle Breeders’ Club has announced details of a Simmental Spectacular to celebrate its 50th Anniversary.

Scheduled to take place at Dungannon Farmers’ Mart on Friday 22nd October, the event is set to feature a show and sale of pedigree bulls, elite pedigree females, and a selection of crossbred weanling heifers.

Announcing details of the Golden Anniversary Celebrations club chairman Keith Nelson said: “Northern Ireland is synonymous for top-quality Simmental cattle, and club members are custodians of some of the breed’s most prolific and world-renown bloodlines.

“Simmentals were imported into the UK in 1970, and the NI Simmental Cattle Breeders’ Club was founded in 1971. The forthcoming sale planned for 22nd October will provide club members with a chance to showcase the ‘cream of the crop’.”

Keith Nelson added: “The sale will offer buyers a rare opportunity to acquire elite pedigree heifers. Females that herd owners would normally be reluctant to sell!”

The sale is also expected to attract an entry of high-quality bulls from many of the Province’s leading herds. “Since the introduction of animal movement restrictions dictated by the NI Protocol, breeders in Northern Ireland are reluctant to take pedigree bulls to breed society sales across the water,” added Keith Nelson.

“Bulls which would normally have been destined for sales in Stirling have been sold privately off farm. Club members have reported a strong demand for Simmental bulls from local and UK-based customers. In the wake of Brexit we are hoping to re-establish the Dungannon sale venue as a one-stop shop for pedigree and commercial herd owners to source stock bulls.”

British Simmental Cattle Society sale rules will apply, and all vendors must be members of a CHeCS approved herd health scheme. All pedigree bulls and females will be pre-sale inspected in accordance with breed society regulations.

Organisers have also unveiled that the Simmental Spectacular will include a choice entry of cross-bred weanling and maiden heifers.

Vice chairman Andrew Clarke explained: ”We are inviting entries of quality commercial heifers aged between six-months and sixteen-months of age (born early July 2020 and end of April 2021). They will be inspected on-farm prior to the event, and the name of the sire will be listed in the catalogue.

“Simmental is noted for its maternal and terminal traits, and there is a strong demand for stylish commercial heifers. We are hoping that this sale will give farmers who are producing Simmental suckler replacements a shop window for their surplus breeding stock. It will also give buyers an opportunity to select replacement females which are progeny of pedigree Simmental stock bulls and proven AI sires.”

Entry forms and schedules are available to download on the Dungannon Farmers’ Mart website: www.dfm-ni.co.uk/Entry-Forms. The closing date for pedigree entries is Friday 20th August; while the entries for the commercial section must be submitted on or before Friday 3rd September. 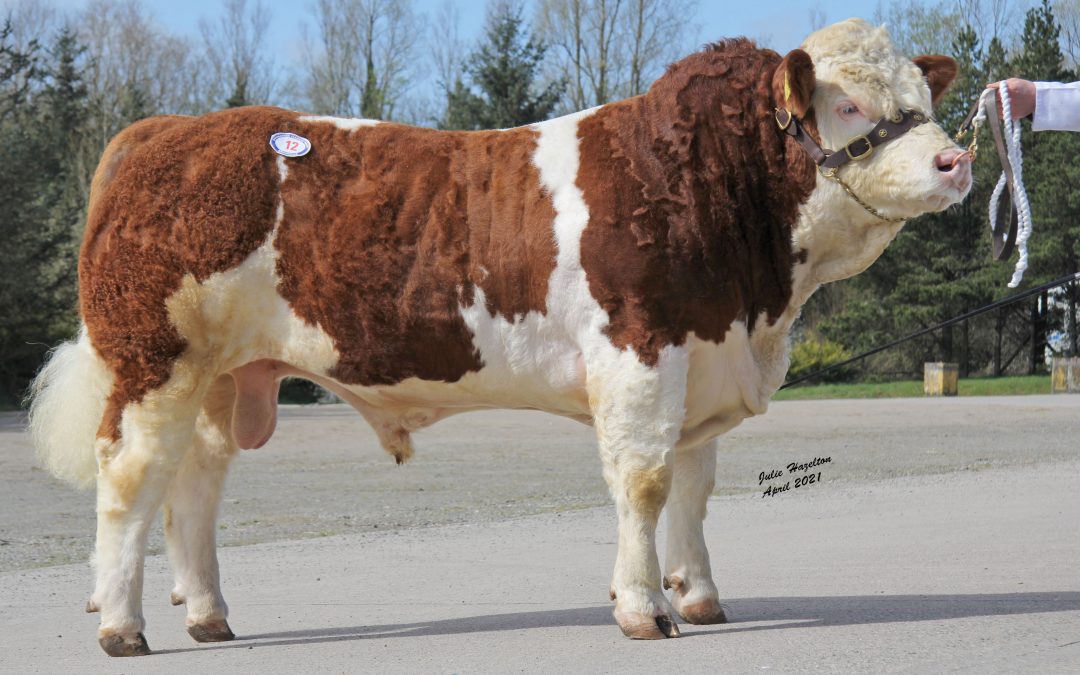 Simmental bulls sold to a top of 5,600gns at the breed society’s spring sale, hosted by Dungannon Farmers’ Mart.

Almost fifteen-months, he was one of the youngest bulls in the catalogue, and boasted the complete package – ring presence, conformation and breed character, with a pedigree to match. Sired by the legendary Raceview King, his dam is the home-bred Carnkern Titan daughter Ashland Candice Terona 2nd – one of eight pedigree cows in the herd.

Ranked in the breed’s top five per cent for eye muscle area +5.7, and top ten per cent for terminal sire index +97 and self-replacing index +108, he attracted strong attention from salering and online bidders.

Following spirited bidding auctioneer Trevor Wylie dropped the hammer at 5,600gns, with the successful bid coming via the telephone from Messrs WJ Fraser and Son, Aughnarrow Farm, Ballindalloch, Banffshire. Stewart Fraser had spotted the bull on social media prior to the sale and was determined to secure him for his commercial suckler enterprise.

Also selling for export to Scotland was the 4,100gns Kilbride Farm Karl consigned by Billy Robson OBE, and sons Michael and Norman, Doagh, Ballyclare. Born in October 2019, this polled bull was sired by Curaheen Gunshot, and bred from the Sneumgaard Imperator daughter Kilbride Farm Fanni 601. He caught the eye of pedigree herd owner Lachlan Quarm who runs the Annick Herd based at Holehouse Farm, Annick Estate, Irvine, Ayrshire.

Three lots sold for 3,000gns each. First to go was the June 2019 Bridgewater Farm Kaymer TSI+76 SRI+74 bred by Nigel Glasgow, Cookstown. A Delfur Decider son, he was bred from Ranfurly Lady Diana 25th, purchased for 4,200gns at the 2nd joint production sale from the Ballinlare Farm and Ranfurly herds, held at Dungannon in September 2016. Buyer was Brian Murphy from Portadown.

Nigel Glasgow’s Bridgewater Farm Kilroy TSI+75 SRI+88 sold for 3,000gns to William Nixon, Ballynahinch. This September 2019 entry was sired by Islavale Frontier, and bred from the Raceview King daughter Ranfurly Beauty 6th. He is in the top five percent for calving ease +5.5, and top 10 per cent for eye muscle area +5.2.

Also securing a bid of 3,000gns was the September 2019 Rehall Karl TSI+65 SRI+71 , bred by William and Keith Stubbs, Irvinestown. Sired by the 8,500gns Islavale Cracker, he is out of the home-bred Drumacritten Callum daughter Rehall Flower – one of nine cows in the herd. Buyers were Hamilton and Matthew Cleland, who run a 130-cow commercial dairy herd based at Legamaddy Farm, Downpatrick. The father and son team have been using Simmental stock bulls for over 25 years, and finish all cross-bred progeny on the farm.

A small entry of females peaked at 1,900gns, paid to Jonathan Henderson, Desertmartin, for the November 2019 Drumsamney Caramel’s Belle. Sired by Shacon Hannibal, she is bred from the Kilbride Farm Comber daughter Drumsamney Amy’s Caramel.