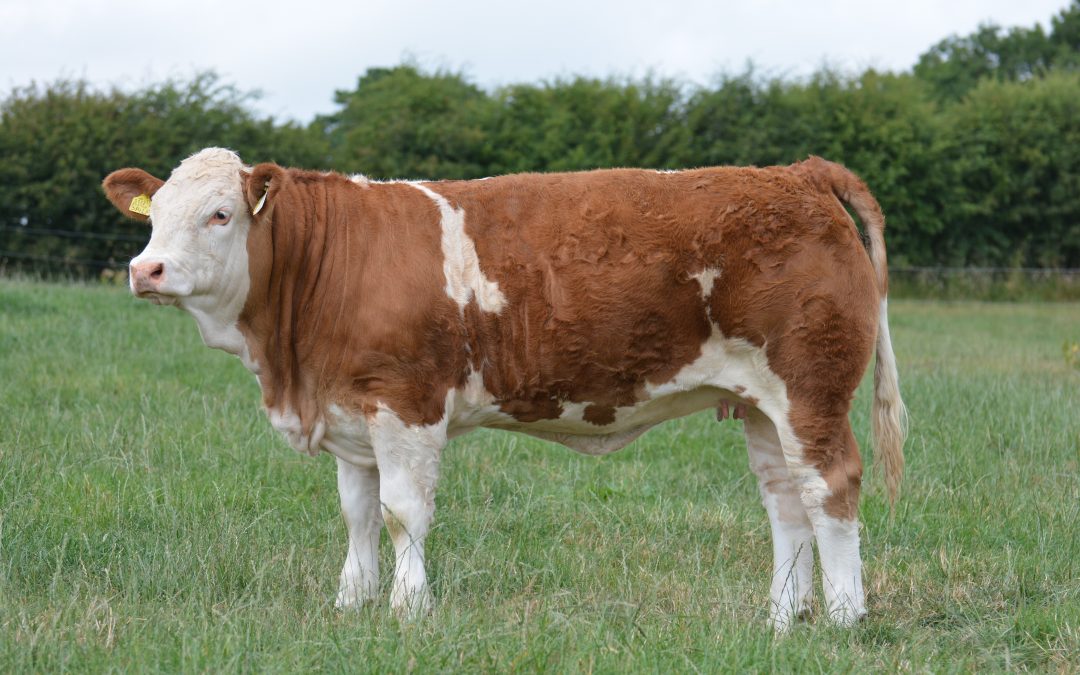 A strong export trade was the theme of the day at the much anticipated premier heifer sale of WH Robson & Sons, Doagh, Ballyclare, Co. Antrim.  Held as a timed on-line auction over three days, 19th to 21st August, this export qualified sale celebrated the fiftieth anniversary of the noted and prolific Kilbride Farm pedigree Simmental herd.

On offer was a select high-quality catalogue of yearling and in-calf heifers from the herds main and prolific cow families.  In the run up to the sale the Robson family had imaginatively and extensively promoted and marketed the sale through social media with in-depth picture and video content of the animals for sale, and with details of their breeding lines.  A number of potential buyers also viewed the animals on-farm.  The hard work paid off with the sale, held in conjuction with Ballymena Market and the online MartEye, raising worldwide interest.  The top priced heifer was purchased by an Australian buyer, with two further heifers heading to buyers in Germany.  Four heifers headed to Scotland, with six going south to the Republic of Ireland, and two remaining with buyers in Northern Ireland.  Fifteen heifers sold in all to average a very healthy £4886.

Commenting following the sale, Billy Robson said:  “We are delighted to have held this sale to mark 50 years of Kilbride Farm Simmentals.  As the herd has progressed in that time, we’ve exported Simmental genetics around the world. It’s very fitting therefore to have seen such an export theme to this sale.   The sale represented an opportunity for purchasers to buy animals from our best breeding lines and we very much trust they go on to do well for their new owners.”  One of the longest established British Simmental herds, Kilbride Farm have been prolific sellers privately and at both the Perth and Stirling bull sales over many years.

Two heifers sold at 4700gns.  The first of these Kilbride Farm Dora 97K (P), headed to Scotland when being bought by Mike Morrice for the Boharm pedigree herd at Mains of Newton, Craigellachie, Moray. The August 2019 born Dora 97K (P), is the first heifer to be offered at sale sired by Islavale Harvest 16, the Ranfurly Confederate C24 11 son.   She is out of Kilbride Farm Dora 75F (P), a daughter of the homozygous polled Ardadoney VIP (PP), and was sold in-calf to Kilbride Farm Jetstream P.

Ballymena Livestock Mart and in conjunction with MartEye 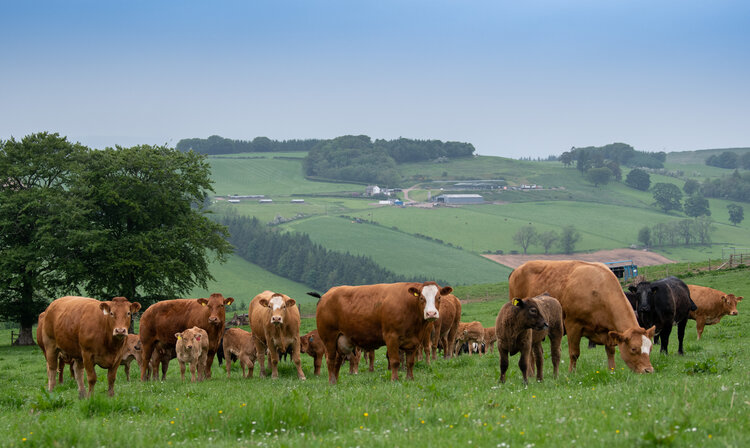 Snapshot commercial herd feature on David and Rosemarie Cornthwaite, Balgray Hill, Lockerbie as they prepare for the first part of their fast-approaching commercial herd dispersal sale at Lockerbie Mart on Tuesday 22nd June.

Beef producers will soon have the chance to purchase top-quality, well-bred cattle from a leading commercial herd based in South West Scotland. David and Rosemarie Cornthwaite of Balgray Hill, Lockerbie, are set to disperse 120 Limousin cross and Simmental cross heifers and cows with Limousin and British Blue calves at foot from their large-scale beef suckler herd on Tuesday, June 22 at Lockerbie Mart.

Featuring top Simmental genetics, the offering includes 85 first to third calvers and 35 fourth calvers and above, as well as four of the herd’s stock bulls which are all proven sires boasting tremendous bloodlines.

These include a Simmental named Newbiemains Daz; two British Blues, Greystone Limelight, and Greystone Meric; and the 19-month-old Limousin, Spedling Producer, a son of the former show cow Maybe Cute.

The Cornthwaites first introduced the Simmental to their breeding policy 13 years ago and they have been most impressed with the breed’s ability to produce a functional suckler cow which goes on to rear a strong calf with good growth rates.

“We buy in Limousin cross Friesian heifers from a closed herd and bull them to a Limousin to breed three-quarter Limousins which we use as herd replacements,” said David, who has been farming at Balgray Hill for three decades.

“The best of these replacement females are then bulled to the Simmental to give us an additional crossing, before being put back in-calf to Limousin or British Blue bulls.

“Although we use a variation of beef breeds, the Simmental is a staple part of our herd and has helped put milk back into our females and improve growth rates in our calves, particularly the males which are sold through the store ring.”

Rosemarie added: “We find Simmental females mature quicker and have more milk at a younger age which has also allowed us to calve heifers at two-years-old, compared to the Limousin crosses at three years of age. This is a huge benefit to our beef herd as the females are productive at a younger age, producing more calves overall.

“The Limousin and Simmental cross works well as you get the milk, shape and good maternal traits in the females.”

While the majority of the heifer calves are kept as herd replacements, the bull calves and heifers not suitable for breeding are sold at nine to 10 months of age through Carlisle, Kirkby Stephen, Lockerbie and Stirling (UA).

Despite selling Simmental-sired calves through store rings in areas where Limousins feature strongly, the yearling cattle from Balgray Hill have met a fantastic trade in the past, with bullocks selling at £1300-£1320 and heifers reaching tops of £1200 at nine to 10 months-old weighing 430kg-500kg.

Balgray Hill have also enjoyed success in pre-sale shows at Borderway Mart, Carlisle, having stood first, second and third in the pens of four at the annual continental store sale held in March.

“These calves are a good weight for age and are easy fleshing animals so they will go and perform well for the finisher,” said David. “It’s a great advantage being able to cross the Simmental cross females to virtually any breed of bull such as the British Blue which produces sweet calves with shape and style.”

Top-quality stock bulls have been purchased in over the years, with all four destined for next week’s sale having bred consistently well for the herd.

“We couldn’t fault the bulls for their temperament while they have been with us, particularly the Simmentals which have been easily handled and fit to work at a great age,” said David.

“The father of our nine-year-old bull Newbiemains Daz, was Newbiemains Apache, which we also owned. Both of these bulls have been very prolific.”

All heifers and cows destined for sale on Tuesday, 22nd June are free of the bull and the herd maintains a high health status, being BVD accredited, Johnes Level 2 and TB 4 (last tested December 2020).

The herd also vaccinates for Lepto & BVD and all calves have been dehorned.

David concluded: “Over the years, other vendors in the south west and Cumbria have shown interest in our calves and were keen to know more about the Simmental cross females we breed and the policy we follow.

“I reckon there’s a secure future for the Simmental as both a maternal and terminal sire, producing milky, fertile replacements and easy fleshing cattle that can be sold at a good weight for age.” 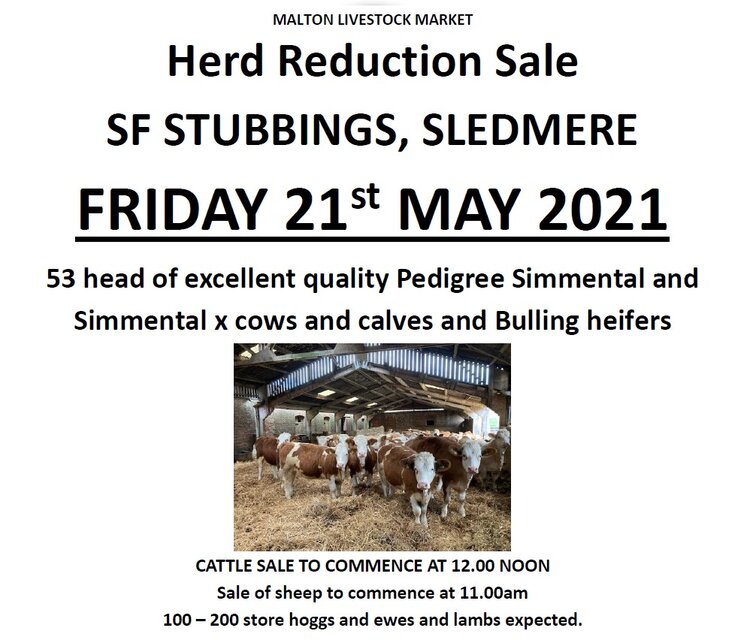 Malton Livestock Market are holding a herd reduction sale on behalf of S F Stubbings on Friday 21st May. The Sale consists of 53 Pedigree Simmental and Simmental x cows and calves and Bulling heifers, and commences at 12 noon. There are 25 Pedigree Simmental bulling heifers from Mr Stubbings’ Sledmere herd. For more information please visit www.maltonlivestockauctioneers.co.uk 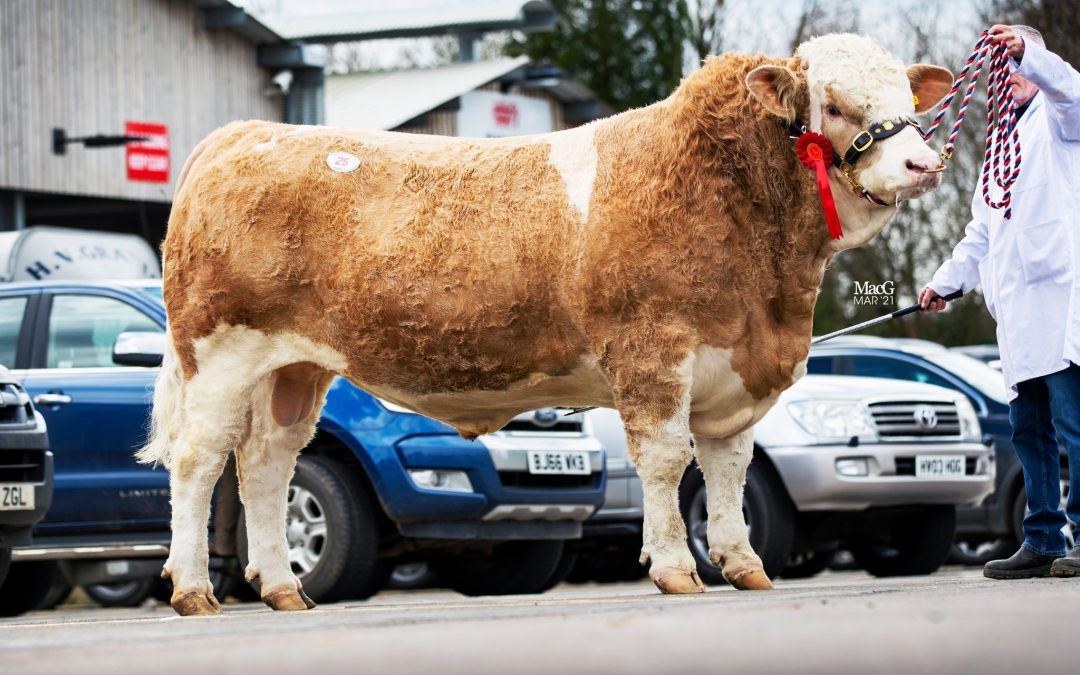 July 2019 born, Cade Kolossal is by Heathbrow Impulse 17 (P), and is out of Dirnanean Abba who is described as ‘ leaving size, strong maternal instincts, and excellent milk production.’ Earlier in the day, this bull had placed first in the Simmental class of bulls in front of the judge Richard McInnes. Staying local, Cade Kolossal was purchased by LW Simons & Son, Brockhill Hall Farm, Melton, Leicestershire.

From the same home the July 2019 Cade King Pin 19 (P), who stood second in the bull class, sold for 2600gns to Robert Carlton, Cherry Tree Farm, Dunchurch, Rugby. Another polled Heathbrow Impulse son, this bull is a heifer’s calf being out of Thursford Debs 36th, a Scotland Hill Cairo daughter.

Through the book at 2300gns was the December 2018 born Midhope Jasmine from Mr WJ Hollingsworth, Mid Hope Hall Farm, Sheffield. This heifer, scanned in-calf, by Woodhall Everhart 13, and out of Midhope Girlie, went to a new breeder C Chuck, Skegness.

TJ Hassall & Co, from Winsford, Cheshire, sold three heifers from their Fishpool herd at 1700gns; 1300gns; and 1100gns respectively.  Showing the productivity and efficiency of Simmental females the 1700gns and 1100gns prices were twin heifer calves selling for a collective 2800gns at one year old.  Selling at 1700gns was Fishpool Lexi.  March 2020 born this heifer is by Sterling Hugo 16 and is out of Fishpool Heather.  Fishpool Lexi, and her twin Fishpool Laura, were both purchased by P Angelides, Langford Moor Farm, Coddington, Notts. The same buyer also purchased Fishpool Lucy at 1300gns.