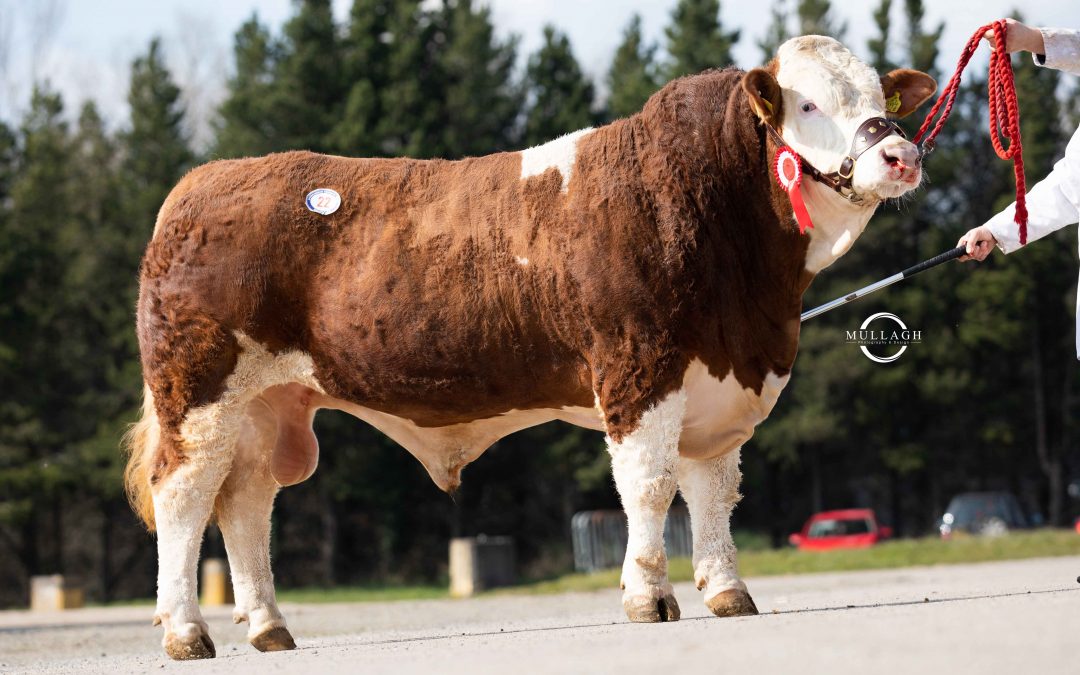 Sale leader was the first prize winning Lisglass Leo TSI+77 SRI+90, bred by the father and son team of Leslie and Christopher Weatherup, Ballyclare. Sired by Islavale Frontier, his dam is the home-bred Liglass Iona – one of 35 cows in the herd. This eighteen-month-old bull is no stranger to success, having won the Reserve Senior Championship at the inaugural Four Breeds Calf Show at Dungannon in November last year.  Ranked in the breed’s top five per cent for eye muscle area at +5.5, he sold to JA Humphrey from Coleraine.

Second highest price of the day 3,000gns was paid to Cecil McIlwaine, and sons Scott and Neil, Newtownstewart, for the Male Champion Corrick Laird TSI+77 SRI+81. Sired by Seafort Gill, this nineteen-month-old bull is the first calf bred from the Omorga Tarbuck daughter Corrick Jenny. He sold to B McDermott from Fintona, County Tyrone.

Founded over 40 years ago, the Corrick herd comprises of 20 pedigree cows.  The McIlwaine’s have sold Seafort Gill sons to a top of 8,000gns, with three averaging £5,250 per head at Stirling and Dungannon.

Irish judge Sean McGarry from the 8-cow Clonguish Herd in Longford said the Male Champion stood out. “There were quality entries at the top of each class, but the male champion really caught my eye. He is a stylish bull with excellent conformation, and is very correct throughout.”

Two lots came under the hammer of auctioneer Trevor Wylie at 2,900gns each. First to sell was the third placed Coolcrannel Mighty TSI+68 SRI+85, consigned by William Phair, Lisbellaw. This fourteen-month-old bull was sired by the 2014 and 2015 Balmoral Show champion Dermotstown Delboy, and is bred from the home-bred Curaheen Apostle daughter Coolcrannel Holly. He was snapped up by Danny McLaughlin from Dungiven.

William and Keith Stubbs, Irvinestown, realised 2,900gns for the first prize winning Rehall Moneymaker TSI+84 SRI+97.  This polled bull was born in January 2021, and is by Curaheen Gunshot; while his dam is the home-bred Rehall Flower. With an eye muscle area of +5.6 placing him in the breed’s top five per cent, he sold to WJ Simpson from Killyleagh, County Down.

First bull into the salering Dressogue Legacy TSI+86 SRI+98 came under the hammer at 2,600gns for Seamus O’Kane and Sons from Drumquin, Omagh. Born in May 2020, he is by the herd’s 11,000gns stock bull Islavale Invincible; and his dam is the home-bred Dressogue Goldie. In the top five per cent for milk +12, he sold to Patrick Quinn from Stoneyford, Lisburn.

Claiming the day’s Reserve Male Championship award was the seventeen-month-old Coolcran Lambrini TSI+91 and SRI+98 bred by brothers Shane and Paul McDonald, Tempo. Sired by Ashland Brandy, he is bred from Coolcran Juliet’s Ella – one of 20 cows in the herd founded in 2006. Buyer at 2,500gns was C McKeeman from Bushmills.

Female trade peaked at 2,600gns, paid to William Nelson, and son George, Rosslea, for the September 2020 born Drumacritten Lily. She caught the judge’s eye to claim the Female Championship plaudits. Sired by the 14,000gns Saltire Impressive, this heifer is bred from the Raceview King daughter Drumacritten Wanda EX91 – one of ten cows in the County Fermanagh-based herd. Buyer was Ian Magill from Millisle who has recently established the Ballyrolly Herd.

The Nelson duo also secured a bid of 2,000gns for the second placed Drumacritten Louise. Born in September 2020, she is by Dermotstown Delboy, and out of a home-bred Curaheen Dickens dam. Buyer was pedigree herd owner Ashley Bowden, owner of the Legmurn Herd based at Stewartstown.