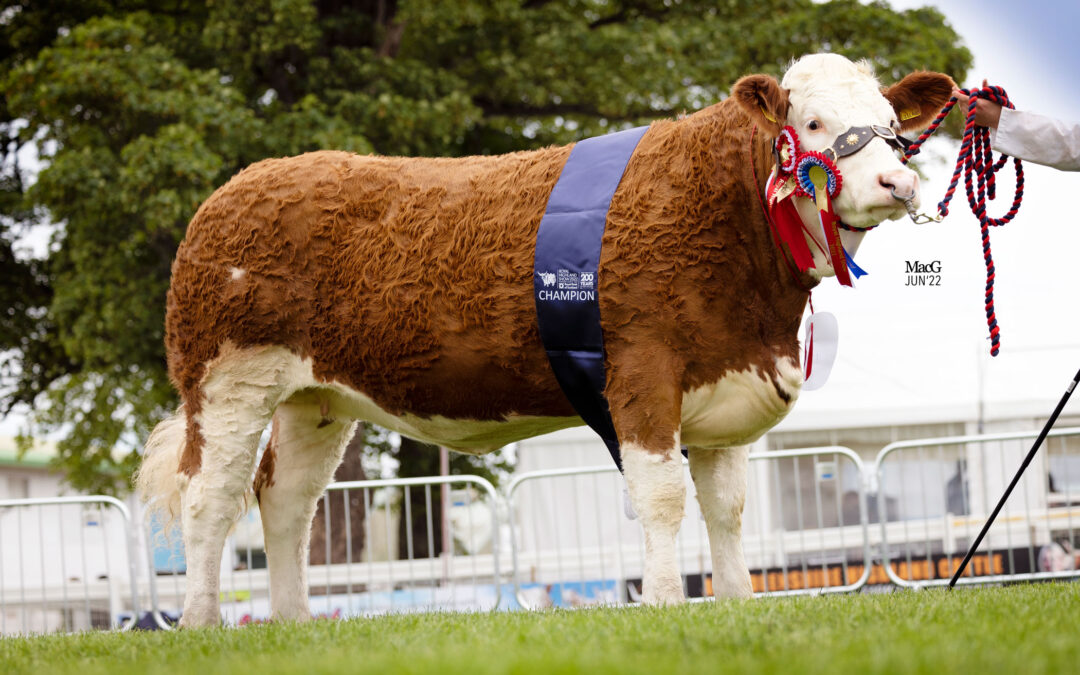 The cattle and the crowds were back to normal at Ingliston, Edinburgh as the 2022 Royal Highland roared into life on Thursday 23rd June and featuring a strong Simmental section of some seventy-five entries.

Judge for the day was Northern Ireland’s Joe Wilson who runs the noted Ballinalare herd of some 60 Simmental cows at Dorans Hill, Newry, County Down.  Played out in front of a large ringside crowd, and after working through some ten classes of bulls and females, the judge tapped out Islavale Lullaby from Reece & Andrew Simmers, Backmuir Farm, Keith, Banffshire as his Female Champion and as the 2022 Simmental Overall Supreme Champion.

Bred by Mr WS Stronach, Berryleys Farm, Grange, Keith, this April 2020 born heifer by Shacon Hannibal 16 and the first calf out of Islavale Inspire GP 82, was purchased by the Simmers for 8000gns at the Society’s inaugural Simmental Next Generation Sale of females and weaned calves at Carlisle in December 2021, and where she had also stood Overall Champion.

Commenting on his choice of Champion Joe Wilson said: “This heifer just had tremendous quality throughout.  Super stylish, she was just full of breed character, was well fleshed and moved really well.  Overall a terrific heifer and just the kind of Simmental I’d love to take home with me!” Of the show generally, Joe Wilson went on to say: “With the advent of Covid I’ve been waiting some three years to judge the Highland!  It’s been a great honour and fully lived up to expectations. I’d like to congratulate all exhibitors for the quality of the stock forward and have no hesitation in saying that the future of British Simmental looks very bright.”

For the Simmers, this Supreme Championship win was the ‘next step up’ and followed hard on the heels of the last full Royal Highland in 2019 and where the Backmuir herd secured the Reserve Overall Supreme Championship with Sterling FCUK Impuls.  Established in 2018, the Backmuir herd now features some 80 pedigree Simmental cows and is already an increasingly prolific herd in both the sale and show ring.  Commenting after the judging a delighted Reece Simmers said: “It hasn’t quite sunk in yet but it’s a tremendous honour to win the Simmental Supreme Championship at what is the blue riband show in Scotland and with such a rich history.  The standard of competition here within the breed and from fellow exhibitors is really high.  To come through that and win the Championship is just fantastic and quite humbling.”

Of Islavale Lullaby, Reece Simmers continued: “Islavale Lullaby was bought as a new bloodline and as an investment in the future of Backmuir Simmentals.  We are really pleased with how she has come on and very much hope that she will be a cornerstone female in the herd.”  Mr Simmers noted that Islavale Lullaby had been served by the herd’s 18,000gns stock bull Wolfstar Jackaroo who was purchased at Stirling in February 2020.

It was very much a Simmental ladies’ day and taking the Reserve Female Championship and the Overall Reserve Supreme Championship was Annick Ginger’s Lucia from the herd of the late Lachlan Quarm, Holehouse Farm, By Irvine, Ayrshire.   February 2020 born this heifer, by herd sire Wolfstar Golddigger and out of Annick Colleen’s Ginger VG 88, placed second in her class to the Overall Supreme before following her all the way through to the Championship places.  Following a string of wins at local and regional shows this summer, a strong Annick team at the Highland saw the herd pick up the Reserve Overall; the Reserve Female; the Reserve Junior female; and along with two first prizes, two seconds, and a third in the classes, and a reserve in the group of three.  The Annick group comprised of Annick Trixibelle 29th; Annick Desiree’s Midnight; and the young bull Annick Maximus 21.  The 2022 show season is providing a showcase for the Annick herd which is set to be fully dispersed at United Auctions Stirling Market on Saturday 10th September and following the sad passing of Lachlan Quarm last year.

Lifting the Male Championship was Gerald and Morag Smith, Drumsleed, Fordoun, Laurencekirk with their April 2020 born bull Drumsleed Legacy 20.  This bull is by the herd’s stock bull Wolfstar Gordy, who himself has had sons up to 11,000gns, and is out of Drumsleed Farina 14.  No stranger to the showring herself, Drumsleed Farina has twice been Reserve Champion at the Simmental Scottish National Show and her last son sold for 11,000gns.  For the 100 cow Drumsleed herd, the Male Championship was secured for the second year in a row with Drumsleed Hivy having won this accolade, along with the Overall Simmental title, at last year’s 2021 Royal Highland Showcase event.  Fantastic supporters of the Royal Highland since 1983, the Drumsleed herd have secured numerous titles including three Overall Supremes in 1998, 2002, 2010, and the showcase event in 2021.

Another bull to secure a bounty of prizes was Denizes Monty from MA Barlow & Sons, Four Oaks, Near Leyland, Lancashire. This January 2021 born bull placed first in his class of thirteen young bulls, the largest on the day, before moving through the gears to take the Overall Junior Championship; Junior Male; and Overall Reserve Male Championship titles.  Full of breeding and performance figures, Denizes Monty is by Denizes Hamish who has sold bulls up to 9,500gns and with his first eleven sons having averaged 6000gns.  He is out of Denizes Trixi-Belle 6th who herself has had sons up to 10,000gns.  Again strong supporters of the Royal Highland, the Denizes herd have had a strong last six years at the full show which have seen them win three Supremes, an Overall Junior & Reserve Male; a Reserve Male; and with Michael Barlow himself judging in the other year. Next stop for Denizes Monty will see him take aim at the October 2022 Stirling Simmental Bull Sale.

Taking the Reserve Junior Male Championship was the January 2021 born Corskie Mikah from Mr WJ&J Green, Corskie, Garmouth, Fochabers. This young bull placed second in his class to the Junior Male Champion, and again in the day’s largest class, before following him through to the Reserve position. Corskie Mikah is by Kilbride Farm Haka and is out of Corskie Elissa VG 88 who is a Dirnanean Bradley 10 EX 93 daughter. Later in the day the Corskie herd picked up the Group of Three award with Corskie Mikah being joined by the heifers Corskie Mimic and Corskie London.

Back in the females and winning the Junior Female Championship and Overall Junior Reserve was Brandane Millie from the herd of Jimmy McMillan, The Beeches, Back Lane, Bradwell Ash, Bury St Edmunds. A well-known figure in Simmental show and sale rings around the UK over a prolonged number of years, this was Jimmy McMillan’s first time showing at the Royal Highland on his own behalf. No stranger to the winners’ circle, Jimmy has been at the halter of a number of Supreme Champions at the Highland and including for such noted herds as Darsham and Sterling respectively. On this occasion Brandane Millie is out of Sterling Candy’s FCUK, a female bought at the Sterling Sale, and whose first calf was the aforementioned Sterling FCUK Impuls, the Simmers 2019 RHAS Reserve Supreme Champion. Sired by the AI bull Sterling Gino 15, this young heifer is February 2021 born. With a show record behind her already, Brandane Millie was Reserve Interbreed at Suffolk Show and will now move on to the Royal Norfolk. The longer-term intention is to enter Brandane Millie into this year’s Next Generation II Sale at Carlisle in December.

A first time and welcome exhibitor in Simmental classes at the Royal Highland Show was David & Lesley Sapsed, all the way from High Heath Farm, Hitchin, Hertfordshire. Their long journey met with reward when securing two red tickets in the classes. First up was the April 2019 born Heathbrow Koko Star, last year’s Supreme Champion at the Great Yorkshire, and who won the class for Females calved before 3 years or due to calve before 3 years old, in Milk, or in calf born in 2019. The Sapseds’ second first prize winner was for Heathbrow Girlie’s Ivy who secured the Female born in 2017 or 2018 in Milk or certified in Calf at the time of Show.

Rolling on to the second day Friday 24th June and the Simmental breed secured the first beef Interbreed of the show when winning not only the Marks & Spencer Beefbreeder title but landing both the Champion and Reserve positions. This Interbreed title takes into account a combination of the animal’s conformation and performance figures. Winning the Interbreed, in front of judge Michael Durno, Glenlivet, Ballindalloch, was the December 2020 born Blackford Local Hero (P) from the noted Mr WG MacPherson (A FIRM), Blackford Farm, Croy, Inverness. This young polled bull is by the show sire Heathbrow Important (P), and is out of Blackford Echo VG 86, a Curlieu Knight daughter. This is another bull that will now be aimed at the Stirling Simmental October 2022 Bull Sale. For the MacPhersons, this latest win made it a nap hand of five Interbreed wins over the years with Simmentals in the Marks & Spencer Beefbreeder competition. Lifting the Reserve was the previously mentioned Corskie Mikah from WJ & J Green.

To common acclaim it was great to be back at the Royal Highland Show and a big thank you and congratulations are extended to all the prize winners and exhibitors, and to the Simmental judge for the day for a job very well done, Mr Joe Wilson.

SP5 Best cow with calf at food, to be judged as a pair
D A & L A Sapsed Heathbrow Girlie’s Ivy

17-month-old Simmental prime bulls (pictured) from Vernon Bailey, Mixbury Hall Farm, Brackley, Northants made to £2125 to top the prime bull trade at Rugby Farmers Market, Stoneleigh on Monday 27th June. A bull weighing in at 790kgs led the trade at £2125, with a 748kg bull at £2027, and a 734kg bull at £1967. An 890kg Simmental steer from DJ Hull and partners made £2163. Meeting the needs of commercial producers, Simmental sired progeny are fast growing with terrific weight for age, producing in spec quality carcases with a high retail beef yield. In work through AHDB, Simmentals have been confirmed as the UK’s leading continental beef breed for age at slaughter.