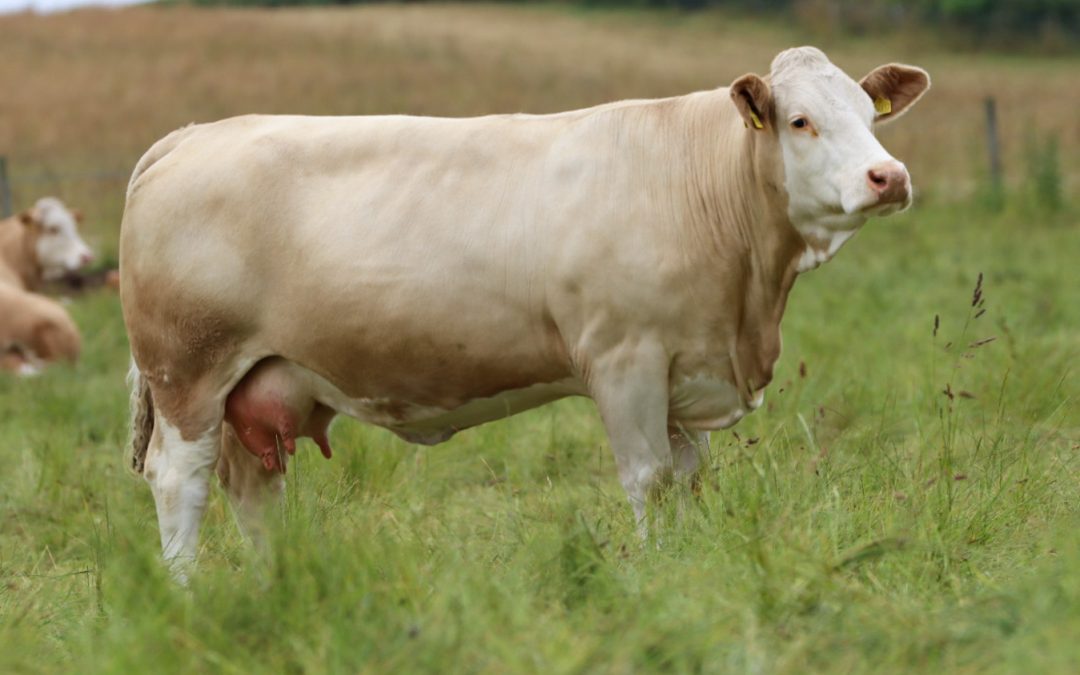 An entirely online show first organised by the British Simmental Cattle Society last year, the second staging of the competition saw a remarkable 754 Simmentals entered over the respective twelve classes.

2016 born, Corskie Heaven, a Dirnanean Bradley daughter out of Corskie Eve, did it the ‘hard way’ by coming through an incredible class of 197 cows, the largest entry in the classes, before lifting the Female Championship and moving on to take the blue riband top title.

Judging the final Championship was Anne MacPherson of the highly noted Blackford herd at Blackford, Croy, Inverness. Commenting Anne said: “The Champion Corskie Heaven is a great example of a Simmental cow; she is very feminine with nice smooth flesh and plenty of length. She’s my type of female and very much shows the maternal traits which are important for the Simmental breed. Congratulations also to Mixbury Hall. Tillbrook Frank looks a really modern, powerful bull with tremendous muscle and length.”

On behalf of the Green family, Laura Beattie said: “It’s fantastic to win this competition and from such an entry both in numbers and quality. Corskie Heaven is just a really nice, feminine cow and we’re delighted that she’s gone all the way. We had eight entries in the cow class and six of them placed in the top twenty, so we are very proud of all the cows! Corskie Heaven is a Dirnanean Bradley daughter and Bradley has bred exceptionally well in the herd. Heaven’s dam, Corskie Eve is by Corskie Valiant, a homebred bull who himself had a strong show career for the herd, including being Overall Champion at the 2009 Scottish National Show. The Society’s ‘Virtual’ Show has been great again this year and it’s been so good to ‘show off’ cattle that have not been able to go out into the show ring over this last couple of years.”

It was a strong showing for the Northamptonshire based Mixbury Hall herd who also lifted the Reserve Female Championship with the Spring born heifer calf Mixbury Hall Milly. Taking the Reserve Male Championship was Rockytop Luca, from Gary and Angela Christie’s Rockytop herd, Glass, Huntly. The May 2020 born Rockytop Luca, had initially won the young bull class in the competition.

The Simmental ‘Virtual’ Show was established in 2020 to bring ‘some fun and competition’ for members with there being no summer show season during the Covid pandemic. Such was the popularity of the competition that the ‘Virtual’ Show was rolled out for a second staging this year and was supported with a massive entry.

Each of the respective classes had a young profile judge who announced their results on a weekly basis and with a supporting video talking about their results. Come Championship time and Craig Hollingsworth of the Midhope herd, Sheffield, judged the Females, whilst Alan Burleigh of the Derrycallaghan herd, Lisnaskea judged the Males. It was then over to Anne MacPherson to judge this year’s Overall Supreme Champion. Tom Hill of the Scotland Hill herd, Doncaster, had the difficult but enviable task of judging the 197 strong cow class from which the Overall Champion emerged.

Commenting generally, the British Simmental Cattle Society’s President Stewart Stronach said: “Congratulations to the Corskie and Mixbury Hall herds for their Championship wins. I’d also like to extend a massive well done to the Simmental breeders around the UK who have readily supported this competition and in such great numbers. Who would ever have thought we would have seen an entry of 197 cows in any show class, even an online class! Throughout the nine weeks of judging the quality of entries has been superb and the competition has been a lot of fun and a terrific showcase for the Simmental breed. We have been amazed week on week by the reach of the posts and the comments and discussion both domestically and in countries across the world. This year’s show really has had a ‘wow’ factor on so many levels. Whilst we hope to return to summer show rings next year, I’m sure there will be a popular demand for a third staging of the Simmental ‘Virtual’ Show.”